Lost To Time But Not Forgotten

Personnel at F. E. Warren Air Force Base recently laid to rest Master Sergeant (Ret.) Robert Meadows at the base cemetery. MSgt Meadows was a member of a unique unit that was once stationed at F. E. Warren AFB, a unit which resides along the fringes of history—the 1381st Geodetic Survey Squadron. While short lived, the history of the 1381st Geodetic Survey Squadron (GSS) is an interesting part of F. E. Warren’s past that is rarely discussed, or possible not known. Although not relative to a “this week in history” theme, this article highlights the forgotten history of the 1381st GSS, in honor of our very own MSgt Meadows.

As intercontinental ballistic missile (ICBM) systems came to actuality in the late 1950s, the need for support facilities and silo sites emerged as well. In order to meet the strict requirements of site placement and location, the U. S. Air Force activated the 1381st Geodetic Survey Squadron on July 1, 1959. Founded to supply the Air Force with geodetic and gravity surveys, geodesy was at the center of the new unit’s mission. Geodesy is a science which measures the Earth’s geometric shape, orientation in space, and gravity field to better understand site movements, according to the National Oceanic and Atmospheric Administration. The 1381st GSS was activated to conduct precise site surveys of potential missile facility locations for future operational use. According to Colonel (Ret.) Gerald M. Adams, missile systems require their “exact position on the face of the earth . . . to be determined” by using “aerial photographs, ground surveys, and satellite reconnaissance.” The 1381st GSS ultimately decided if a specific location met the missile system’s unique logistical and technical requirements.

Originally activated at Orlando Air Force Base in Florida in 1959, the Geodetic Survey Squadron fell under the command of the Air Photographic and Charting Service, also known as “The Eyes of the Air Force.” The new squadron included thirteen officers, forty enlisted, and seven civilians. The unit’s first mission was to conduct geodetic surveys in support of Thor missile sites. Success with the Thor system resulted in the 1381st GSS later supporting Atlas, Minuteman, and Titan operations. Secondary to site surveys, the squadron also supported worldwide mapping efforts, as the unit’s geodetic surveys were requested by a variety of agencies and enterprises. While a majority of the GSS’ mission comprised of geodetic control surveys in support of Air Force ICBM operations, the unit also assisted a variety of other agencies as well, including the National Aeronautics and Space Administration and National Oceanic and Atmospheric Administration.

In 1965, the 1381st GSS was re-assigned to the Military Airlift Command’s 1370th Photomapping Wing and relocated to F. E. Warren AFB in Cheyenne. The amplification of ICBM operations engendered by changes in national policy and international relations led to the squadron’s relocation to Cheyenne, where it could better support the multiple strategic missile wings throughout the nation. With the mission change, and subsequent increase in operational requirements, the GSS drastically grew in manning. The unit now encompassed sixty-nine officers, three-hundred and sixty-one enlisted, and thirty civilians, including MSgt Meadows. The 1381st GSS remained at F. E. Warren AFB until July 1, 1972. The squadron was awarded an Air Force Outstanding Unit Award in 1966 for meritorious service and outstanding operational achievements, the same year that MSgt Meadows retired.

Often unheard of, or overlooked, the 1381st Geodetic Survey Squadron was pivotal in the development of our nation’s nuclear-missile enterprise. The unit ensured all site locations met the operational requirements of each missile system, an aspect few consider, yet is pivotal for asset deployment. As Victor J. Haas, a fellow surveyor explains, MSgt Robert Meadows and the GSS crew “were a rare breed of personnel,” as they “were the only Geodetic Survey Squadron in the USAF.” One squadron ultimately supported the entire ICBM enterprise for the Air Force, a rarity indeed.

(A special thank you to one of our local historians, Mr. Dan Lyon, for his assistance with researching this week’s topic) 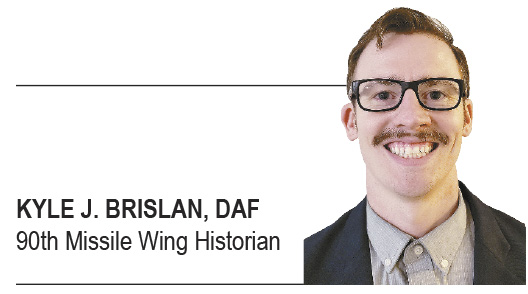 The post near Cheyenne is formally named Fort D. A. Russell

The End of the Great War