US delivers humanitarian aid to Beirut

AL UDEID AIR BASE, Qatar – In a joint endeavor to assist the Lebanese Armed Forces and the people of Lebanon after a deadly explosion in Beirut, U.S. Airmen and Soldiers stationed in Qatar worked to load the first U.S. Air Force C-17 Globemaster III with humanitarian aid, Aug. 6.

“Support of this magnitude at such speed wouldn’t be possible without the joint effort of all members of Al Udeid Air Base, our U.S. Army counterparts at Camp As Sayliyah and our gracious Qatari partners,” said Brig. Gen. Daniel Tulley, 379th Air Expeditionary Wing commander. “In the wake of tragedy, it truly takes a combined effort to make the mission happen. We do this every day in Qatar, and that’s exactly what we are doing in support of the Lebanese Armed Forces.”

Soldiers from the ASG-Qatar at Camp As Sayliyah packed and loaded 11 pallets of humanitarian aid, which contained more than 28,800 military field rations, known as MRE or meals ready to eat, 11,520 bottles of water and two pallets of medical supplies and transported them to Al Udeid Air Base with support of a local Qatari transport company. 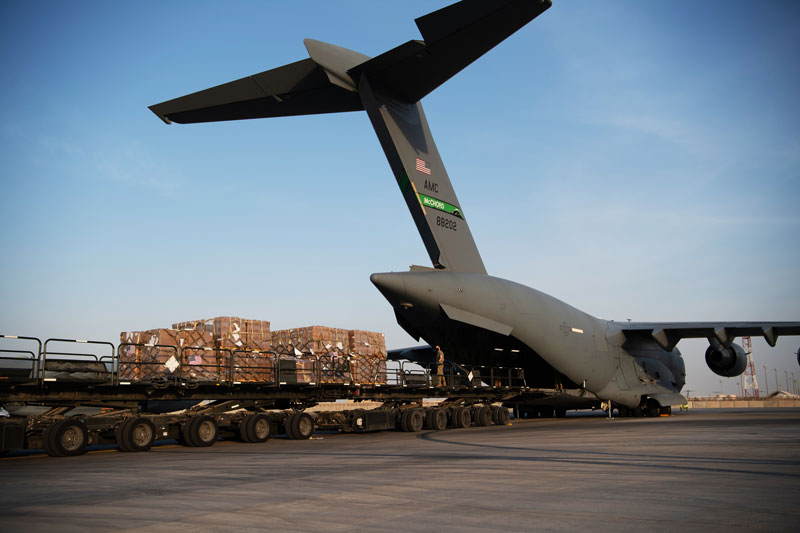 “In short notice, ASG-Qatar assembled Soldiers and limited contract support to quickly palletize 11 pallets to be flight-worthy; consisting of water, MREs and medical supplies,” said U.S. Army Lt. Col. Elizabeth Pura, ASG-Qatar director of logistics. “(I’m) truly grateful to the Soldiers and civilians who stepped up to support the mission. I appreciate our Air Force personnel support from AUAB, it’s nice to see a combined effort from all.”

Upon their arrival to Al Udeid, the pallets were received by Airmen from the 8th EAMS, and processed for loading onto a C-17 bound for Beirut.

“At a moment’s notice, our mobility Airmen and the global air mobility support system stand ready to take action in tough situations like the explosion in Beirut,” said U.S. Air Force Lt. Col. Nicholas Lee, 8th EAMS commander. “The 8th EAMS is proud to be able to answer the call to support the Lebanese Armed Forces and help those in need of supplies with rapid global mobility.”

More In Around the Air Force